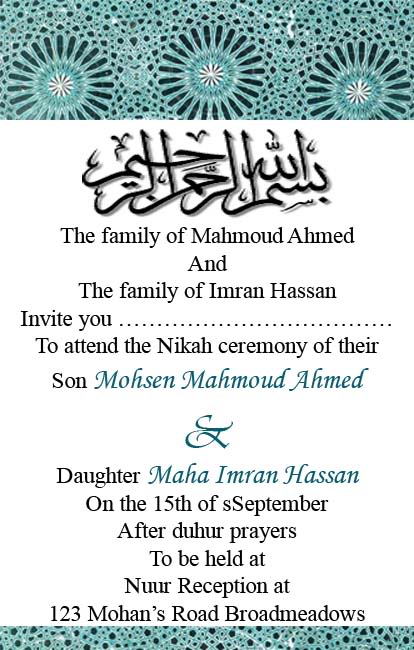 Muslim wedding invitations have a distinct position when it comes to traditional values. Due to the fact that each and every phase of the wedding is conducted through religious dictates, a holy aspect is always present in Muslimwedding invitation wordings.

Muslim wedding invitation wording always begin with Bismillah Alrahmani Abraham which means “in the name of god the most beneficent and the most merciful.” Some people prefer to write it in Arabic as all Muslims understand its translation and can easily read it and some simply translate it in English.

Muslim wedding invitation wordings always contain prayers to the couple and wishing them well with their marriage.

For example, May the grace of the Almighty be with this couple and that they shall receive all the success in their marriage and May He bestow His blessings like uidance, health, wealth and faith to follow the path of guidance.

Another important aspect that determines how to write Muslim wedding invitation wording is are you inviting the guest for the Nikah, which is the actual wedding vows or the wedding celebration ceremony.

The reason this is important to determine, most Nikah ceremonies are specifically for men only and women do not attend, even the bride. Instead the Bride’s father, uncle or brother will present her in the actual Nikah ceremony.

The wedding venues are usually held in two different receptions rooms next to one another, one for men and one for women. At the end the groom will come out to take his beautiful bride home.

Invite you to attend the Nikah ceremony

Insha Allah to be held

We ask Allah to bless their union and give them

Allah decided their marriage in heaven

And we would like to celebrate it on earth

May Allah bless their marriage

and bless them with happiness and healthy kids (Amin).

The family of Ahmed Ali

The family of Samir Waliid

Request the presence of

To their son and daughter Nikah ceremony

On the 2nd of February two thousand and **

Insha Allah to be held at

celebration to be fallowed

Among His proofs is that He created for you spouses from among yourselves, in order to have tranquillity and contentment with each other, and He placed in your hearts love and care towards your spouses. In this, there are sufficient proofs for people who think. [30:21]
The family of Mahmoud Ahmed

The family of Imran Hassan

To attend the Nikah ceremony of their

On the 15th of September

To be held at

The first four sentences of the above Muslim wedding card is Quran Varese about marriage. Most Muslim wedding invites will have the above Varese printed on the invites to remand how important and special wedding ceremony is.

heart love and mercy for each other

Please join us to ladies only wedding ceremony

On the 10th of April two thousand and **

On the 15th of September two thousand and **

RSVP by the 20th of August two thousand and **

We are pleased to announce the wedding ceremony of

On the 13th of January two thousand and **

To be held at

All thanks to Allah Subhana Wata’ala

That united the hearts of

May they live happily ever after (Amin)

And may Allah subhana Wata’ala bless

Them with righteous children (amin).

You are invited to attend

The two receptions will be next to one another

Reception A is for men and Reception B is for women

Ceremony on the 15th of April two thousand and **

Hopefully the above Muslim wedding invitation wordings gave you an idea how to write an muslim wedding cards for Islamic marriages. Remember as long as you provide all the necessary information on the card everything else is extra.